These days the majority of people accessing any web site you build will be using a device with a small screen, such as a mobile phone. But phones come in a wide range of sizes and resolutions, and many people will still access that same site from a laptop or desktop with a much larger monitor (as well as other capabilities, such as a mouse instead of a touchscreen). Different screens may require different visual appearances: for example, a three-column layout would be hard to read on a mobile phone! This poses and interesting design dilemma: how do you build one site that looks good and works well on both tiny phones and gigantic desktop monitors?

The modern solution to this problem is Responsive Web Design, which involves using CSS to specify flexible layouts that will adjust to the size of the display: content can be layed out one column on a small mobile screen, but three columns on a large desktop. 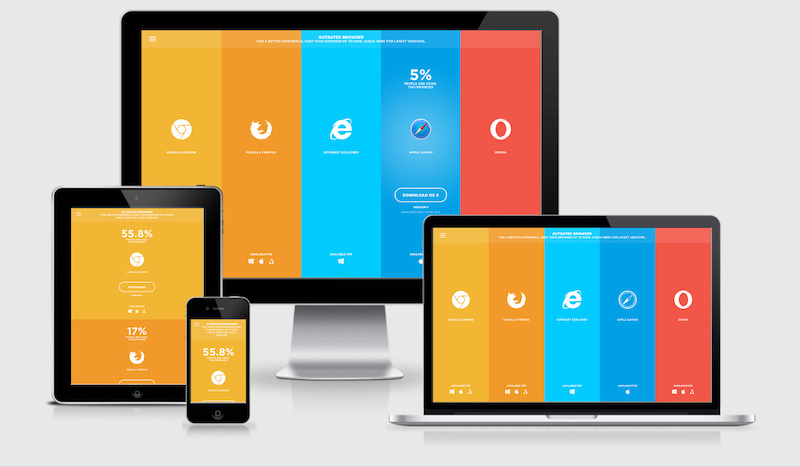 Example of a responsive web site on multiple devices, with content and layout changing at each size. From responsivedesign.is.

This chapter discusses CSS techniques used to create responsive web sites. These techniques underlie popular CSS frameworks, so it is important to understand them even if you rely on such tools.

Responsive design is often framed as a technique to “make it also work on mobile”. This approach feels easy since websites are usually developed and tested on desktops, and follows from the software principle of graceful degradation (systems should maintain functionality as portions break down, such as the “capability” of having screen real estate).

But since websites are more likely to be visited on mobile devices, a better approach is to instead utilize mobile-first design. This is the idea that you should develop a website so it content and purpose is effectively presented on mobile devices (e.g., the most restricted in terms of screen size, capabilities, etc). Only once this base level of functionality is in place should you add features to make it also look good on larger devices such as desktops. This approach is also known as progressive enhancement: provide the core functionality, and then add “extra” features as more capabilities become available.

Remember: working on your personal machine doesn’t ensure that it will work on anyone else’s!

A great way to test the responsiveness of your design is to click on the Toggle Device Toolbar icon in your element inspector: 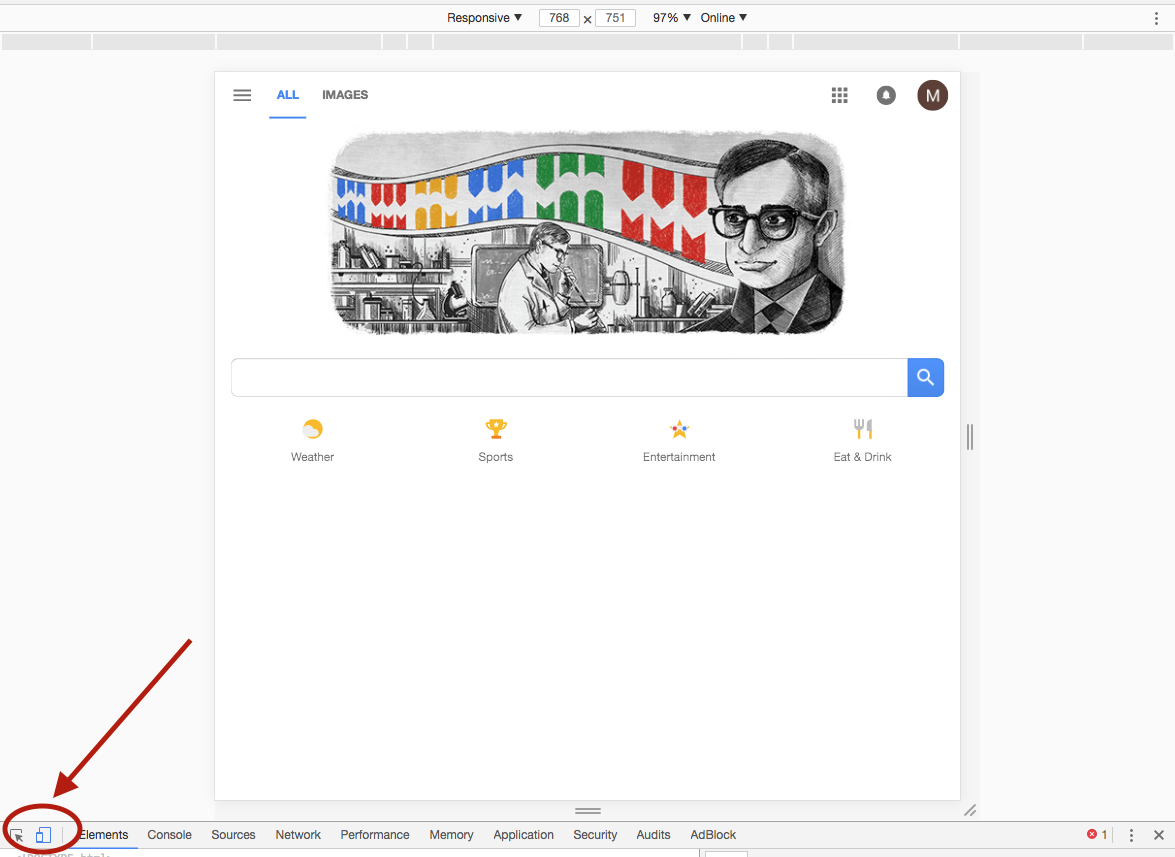 This will allow you to specify a variety of different screensizes for specific devices of interest (i.e., an iPhone 5s, etc.).

While there is no magic formula for designing websites to support mobile devices, there are a few general principles you should follow:

Mobile web browsers will do some work on their own to adjust the web page in response to screen size—primarily by “shrinking” the content to fit. This often produces the effect of the website being “zoomed out” and the user enlarging the web page to a readable size and then scrolling around the page to view the content. While it may “work” it is not an ideal user interaction—this behavior can also interfere with attempts to be explicit about how webpages should adjust to the size of the screen.

To fix this, you need to specify the viewport size and scale by including an appropriate <meta> element in your HTML:

Including this element will keep the text size from adjusting to the browser’s width (though very narrow browsers may still shrink the text).

While not technically part of any web standard, the viewport meta element was introduced by Safari and is supported by most mobile browsers. The content attribute for the above meta tag sets 3 properties for mobile browsers: width (how big the viewport should be, specified to be the size of the device screen), initial-scale (how much to initially “zoom” the page, specified to be 1x or no zoom), and shrink-to-fit (tells Safari 9.0+ not to shrink the content to fit).

You should include the viewport meta tag in all of your responsive pages. Make it part of your default HTML template!

In order to define a webpage with a responsive appearance, you need to be able to conditionally change the applied style rules depending on the size of the screen (or browser window). We can conditionally apply CSS rules by using media queries. A media query is a bit like an if statement in CSS: it specifies a condition and the rules (selectors and properties) that should apply when that condition is true.

Media queries have syntax similar to the following:

A media query is structurally similar to a normal CSS rule. The “selector” is written as @media, indicating that this is a media query not a normal CSS rule. The @media is then followed by a query expression, somewhat similar to the boolean expressions used in if statements. Expressions are written in parentheses, with the media feature to check, followed by a colon (:), followed by the value to check against. There are no relational operators (no > or <) in media queries, so you use media features with names such as min-width and max-width (to represent width > x and width < x respectively).

You need to put full rules (including the selector!) inside of the media query’s body. You can’t just put a property, because the browser won’t know what elements to apply that property to.

Media queries follow the same ordering behavior as other CSS rules: the last rule on the page wins. In practice, this means that media queries can be used to specify conditional rules that will override more “general rules”. So in the example above, the page is set to have a font-size of 14px using a rule that will apply on any screens. However, on larger screens, the media query will also apply, overriding that property to instead make the default font size 18px.

Following a mobile-first approach, this means that your “normal” CSS should define the styling for a the page on a mobile device. Media queries can then be used to add successive sets of rules that will “replace” the mobile styling with properties specific to larger displays.

This structure (starting with “default” mobile rules and then using media queries with increasingly larger min-width values) produces an effective mobile-first approach and clean way of organizing how the appearance will change as the screen gets larger. Note that while you can define as many media queries as you want, most professionals define only a few that match the common breakpoints between phone, tablet, and desktop screen widths. Since the media queries need to come after the mobile rules, they are often included at the end of the stylesheet—give all the mobile rules first, then all the media queries that modify them. (You can and should put multiple rules in each media query).

(Alternatively, it’s also reasonable to organize your stylesheets based on page “section”, with the mobile rules for that section given before the media queries for that section. E.g., after all your rules for creating the page header, put the media query with variations for desktop headers. Use whatever organization makes your code readable and maintainable, and leave plenty of comments to guide the reader!)

By default (without any style rules applied to the .row or .column classes), the four inner <div> elements (as block elements) will stack on top of each other. This is the behavior you want on mobile narrow screens, so now additional CSS or Flexbox usage is needed.

In order to turn these divs into columns on larger displays, introduce a media query that applies the flex layout to the .row (which acts as the container), thereby lining up the .column elements (which act as the items)

In this case, the first media query (768px + or medium-sized displays) applies the flex layout and specifies that the items should wrap if they overflow the container… which they will, since each item has a default flex-basis size of 50% of the container. This will cause each of the 4 items to take up 50% of the parent, wrapping around to the next line.

Then when the screen is larger (1200px + or large-size displays), the second media query is applied and overrides the flex-basis so that it will automatically calculate based on the content size, rather than being 50% of the parent. That way as long as the columns fit within the parent, they will all line up in a row (they have the flex-grow property to make them equally spread out).

The best way to get a feel for how this works is to see it in action: see this CodePen for an example of the above behavior—resize the browser and watch the layout change!

Media rules are a powerful and declarative way to create a single page that looks great on everything from a small mobile touchscreen to a large desktop monitor with a mouse, and form the foundation for responsive CSS frameworks that can help you easily create fantastic looking pages.